This year District 33 is offering a new type of award called District Bucks. This is in addition, but different that the traditional TI Gift Certificates (a.k.a “TI Bucks”). Here we’ll explain what District Bucks are, how they work, and how they are different from “TI Bucks”.

View Club Account Balances
How to Submit a Reimbursement

1.  What are District Bucks?

2.  Why did District 33 start District Bucks?

Previously, monetary awards were only paid using Toastmasters International (TI) Gift Certificates, which can only be used to purchase items from the TI Store. Use of this new District Bucks Program provides clubs with more money to cover more club expenses.

3.  What is the difference between TI Gift Certificates and District Bucks?

TI Gift Certificates (TI Bucks) are used only to purchase items from the TI store (https://www.toastmasters.org/shop). To redeem, they must be mailed to World Headquarters with an order form that lists the items to be purchased. TI Gift Certificates are given to clubs when awards are announced during the District Annual Conference (held April 29-30, 2022 this year) and end of the year awards and recognition event (generally held after the program year around late August-early September). TI Gift Certificates have an expiration date of about 2 years.

4.  What are club expenses that can be reimbursed using District Bucks?

5.  What expenses are not allowed?

6.  What incentives are awarding District Bucks?

7.  How does a club submit a reimbursement to use the money held in the club’s District Bucks account?

When the club purchases an approved item, they submit the expense receipt(s) and form to the Finance Manager. The item cost must be equal or less than the money accumulated in the club’s District Bucks account. There are two ways that clubs may be reimbursed: by check or electronic deposit into the club checking account. To be reimbursed by check, a copy of the receipt(s) clearly showing the item purchased, amount and date of purchase and TI Voucher for Reimbursement form must be completed by the person submitting the expense on behalf of the club. The receipts and Voucher for reimbursement form can be scanned and emailed to the Finance Manager at finance@d33tm.org or mailed (please contact the Finance Manager for the mailing address). To be reimbursed by electronic deposit to a club bank account, the club must set up a Concur account and use the Concur system to enter expense information, upload copies of receipts and submit through the Concur system. To set up a Concur account, please contact the Finance Manager at finance@d33tm.org. Both methods of reimbursements — by check and electronic deposit — requires review and approval by the Finance Manager and District Director before disbursement.

8.  How long can District Bucks be used?

Throughout the year but before June 30, 2022. Since this is a pilot, the continuation of the District Bucks is not guaranteed in 2022-23. This decision will be made by the District 33 Director-Elect for 2022-23.

10.  How can I check how much is in my club’s District Bucks account?

A D33 District Bucks Club Account Status spreadsheet is available online for clubs to look up.

11.  Why is this a “pilot” District Bucks program?

The District looked into other reimbursement methods used in other Districts for their incentive programs. The District Bucks program is one method used. It is a pilot to allow us to learn how best to set up the program so that is not administratively burdensome to implement and manage, and will benefit clubs. The lessons learned will be shared with the District 33 Director-Elect for 2022-23 to determine the continuation of the program for the next Toastmaster year.

12.  Who do I contact if I have additional questions about the District Bucks program?

Note: Links in PDF do not work.  We’re working on it. 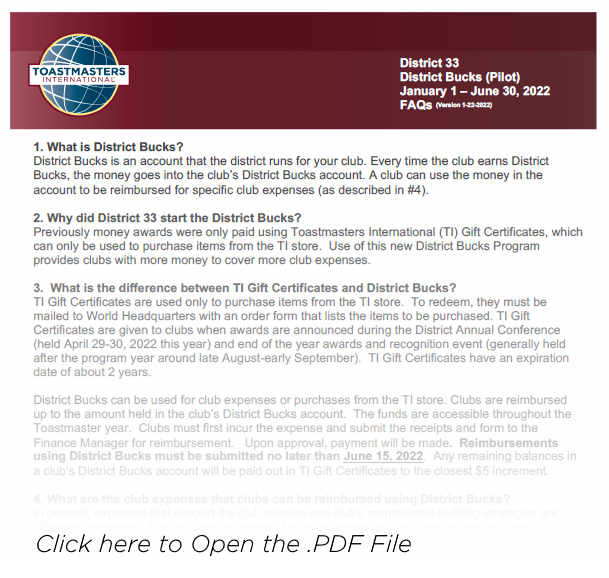